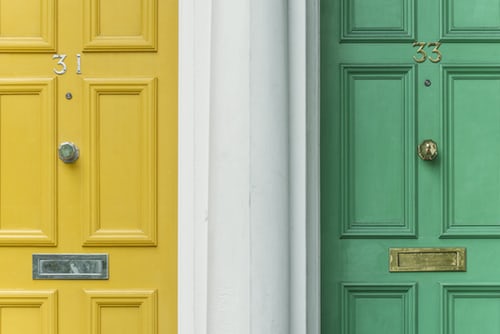 It was clear that God asked me to bring a meal to our neighbor this past Sunday. We had plenty of chili leftover after feeding friends and family. It just made sense that I would share it with someone close by. The back story being that our neighbor lives a pretty reclusive life. Very little interaction with us except an occasional hello or good morning. Which is why I thought this would be a nice gesture.

The oddest thing happened. He turned down the offer. There I stood on his doorstep with white chicken chili, cornbread, homemade apple crisp and a topper of vanilla ice cream. A little dumbfounded, I’m not sure what my face looked like, but I mustered a response at the moment and said, “so you’re not a big chili fan?”. He said, “no, I like chili but no thanks”. I said, “how about apple crisp?” He said, “nope”. I said ok, “no problem – see ya later.”

I walked away thinking that was weird.  At first, I took it personally and realized that wasn’t being fair to myself or him. Then I thought, maybe he believed we wanted to buy his house and I was trying to poison him? What the heck was that about? Metaphorically scratching my head, I put the Tupperware containers back in the fridge and went about my business, but not before eating the ice cream.

Then it hit me. Does it really matter whether he accepted the peace offering, or in this case really good chili? Of course not, God was clear. Give your neighbor sustenance for the day. I did. He chose to decline the offer. Who knows why? Maybe someday I will, but being obedient to God’s voice was what mattered most. After reflecting on the incident later I hear God say, in my heart and head – WELL DONE! I’m proud of you. I replied in my head. Thanks, but why did he refuse? …….Silence.

Neighboring well means loving well. It means putting the needs, desires, or in this case, non-desires of others first. It really doesn’t matter how it looks from the outside. I believe that was an exercise in trusting God more than my typical instincts.

What prompted my offer was hearing and absorbing a message the hour before at church that challenged each of us to neighbor the way God would neighbor. Our study was from the passage in Mark’s gospel where Jesus provided a charge for each of us to Love God first, and Love Others as we would ourselves. The greatest commandments. Those commandments that usurp the law in favor of love.

If you think about the world at large then my neighbors’ response makes sense. There’s massive resistance to the gift given us by Jesus Christ. Resistance to the love that’s given unconditionally and only requires a “yes” and “amen” to become part of God’s forever family – adopted into a new way of thinking. No strings attached. If I had to take a guess, my neighbor may have believed he owed me something in return if he accepted an unconditional meal. Because he believed it to be so, doesn’t make it true. I also know that he tragically lost his daughter early in life. The hurt from that seemed to drive him underground. I can only imagine what it feels like to live with such a tragic loss. Yet there are people all around us that experience loss. We all do. The healer of all losses gave His own life for us. Yet the free gift of salvation is an elusive concept for many. It requires complete surrender and an admission that we don’t have what it takes on our own to make life work. That’s a big ask for many folks.

Letting go makes us freer to experience the love of God and others. But it’s counterintuitive to think that giving up control is the most blissful experience anyone can have. Control is an illusion, but we believe it to be the answer to all our problems. 38 Special said it best in their hit song, Just hold on loosely – But don’t let go – If you cling too tightly – You’re gonna lose control. A little out of context but you get the idea.

Neighboring well requires all of us to give of ourselves in a way that requires no response. Loving unconditionally the way God did by sacrificing His only Son to save us from the consequences of a really bad decision. A decision to eat from the Tree of the Knowledge of Good and Evil when we were clueless as to what “evil” OR a fallen “good” really looked like. That whole choice centered around our desire to be like God. In fact, it meant we wanted to be our own god. Controlling our own lives, in the way the tempter so conveniently left out of his disingenuous discourse.

Loving God and loving our neighbor is no simple assignment. It’s about the condition of the heart. It’s a yielding of sorts. It’s a willingness to adopt the notion that others needs should be placed before our own. No matter the outcome. Neighbor well friends and experience the richness of Christ through His eyes.