The Daily Memo | August 12, 2020 | The Unseen Beginning – An Excerpt From Embracing Brokenness 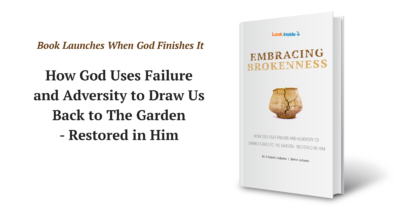 We were born into a world at war.

Do you believe that? We’re not talking about the Civil War, World War II, Desert Storm, or any other conflict or battle we happen to be engaged in at this moment in time. We’re talking about a much more formidable opponent. An invisible one. Naked to the eye. An enemy that seeks to destroy everything good in us. That’ll stop at nothing to ruin us. Starting at the beginning of our lives if that’s what it takes.

Well – it’s a process. Recognizing that this world is NOT a safe place and we do have an enemy that hates us is a very good start to the process.

Just look at fallen creation. We can learn much from the way the bird kingdom interacts.

I (Steve) was peering out the window – while in the shower. Yes, we have a window in the shower. It’s located at eye level, in case you were worried about too much exposure to the elements.

There on the ground, near our bird feeders, was a mourning dove making his way around the plethora of nuts and seeds I had tossed there the night before. He was in bird heaven – fat, dumb, and happy as most doves look while chowing down on the delicacies of the day. Suddenly another dove landed in the tiny plot of ground assigned to this feast. My seemingly meek, fat, dumb, and happy fine feathered friend, acting like his whole life was being threatened, launched into full attack mode on this unsuspecting peer. Off went his rival and equilibrium was restored. All was well in the dove world – for a second or two. Then like something out of a bad dream, another dive-bombed into the feeding frenzy and my little guy launched beak-first into action. It was an all-out, take no prisoners, assault. He won again, and the other guy headed for the hills – or nearby tree in this case.

Then it struck me.  That selfish little bugger – he’s just like me. If anybody messes with my pile of stuff, boy, are they in trouble. And in a bird’s world what else is there but eating, pooping, sleeping, and making more little birds?  Just like him, I’m saying don’t get near my territory, or my woman, or my career, or my pride, or my wounded parts. I’m having none of that.

The dove taught me a lesson that day. Since the fall of man, even the bird population lost harmony. I can only imagine when in the Garden of Eden, that dove would have welcomed his buddies with open wings. Heck, he may even have tossed a few nuts their way. Then happily shared the real estate with the rest of his friends. But sin ruled the day and has ever since.

Whether the mourning dove is shooing off the competition, the cheetah attacking the giraffe, or us gossiping about that annoying individual in the next cubicle, we’ve all fallen to the ravages of sin.

The devastating ramifications of Genesis 3 are very real but skimmed over far too often. Most Christians are great at outlining how sin entered the world, creating a huge void in life that can only be filled by a Savior—and then jump straight to Jesus. No complaints here . . . there is no better place to go . . . but how often do we double back around and really dig into what happened back there in Genesis? In that unseen beginning?