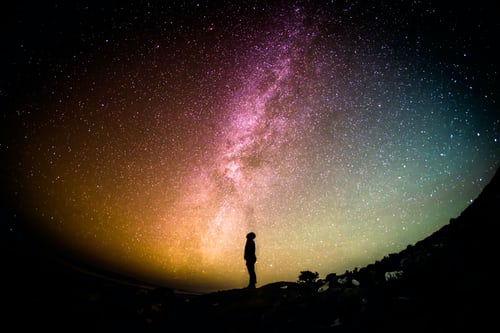 Christmas Eve is my favorite night of the year.  There is such a sense of wonder, anticipation, and holiness upon this night.  Nobody on the earth or under the earth had any idea what was about to happen – God had quietly moved all the pieces into place, all the anticipation was coming from Heaven.  The time had come.  Imagine what it was like to have been there, when the holy light of herald angels exploded above the shepherds keeping their flocks that night.  The pitch blackness pierced by a light so bright it would have been painful to behold.  And then to be greeted by that angelic voice – their voices were often described as sounding like trumpets, this was not a subdued encounter in the night.  This was a proclamation from Heaven in all its glory:  He is here.

Imagine the stillness in Heaven in the moments leading up to this visitation.  The babe Jesus was just born quietly in a stable not far away in Bethlehem.  Certainly the hosts of Heaven stood guard over their Lord as he was brought into this world that he helped create from the beginning.  Imagine their quiet reverence, legions of his angels kneeling around that humble manger watching their prince take human form, their Lord who loved his people so much that he came himself to set them free.  You could hear a pin drop, all activity ceased, all eyes fixed on this glorious moment.  For you see, this was the fullness of time.  This was the night that God released his plans and set the wheels in motion – plans that God laid from the foundation of the world.  He had an answer before there was a need, before Adam took a bite of the forbidden-fruit God prepared himself a sacrifice.  And in the midst of that holy silence, a babe took his first breath and let out his first cry – Immanuel, God with us.

The shepherds were given glad tidings of great joy that night, and the angels praised God saying, “Glory to God in the highest, and on earth peace, goodwill toward men”!  Goodwill seems like such an understatement – This is the greatest love story ever told, a story of unending love and redemption.  For God so loved the world that he sent his only begotten Son, that whoever believes in him should not perish but have everlasting life.  For God did not send his Son into the world to condemn the world, but that the world through Him might be saved. (John 3:16-17 NKJV)

The greatest gift ever given, was given for all.  My prayer this season is that we would receive anew the heart cry of “Abba, Father”, and experience that first love again as his children.  Ask the Lord to bring his light to the night sky above you and bring his presence near, especially if you find yourself in what feels like a dark and lonely place.

The Lord bless you and keep you.

The Lord make his face shine upon you, and be gracious to you.

The Lord lift up his countenance upon you, and give you peace.

Michael Kurtz & The All the Rest of Us