What Is Your Messiah? 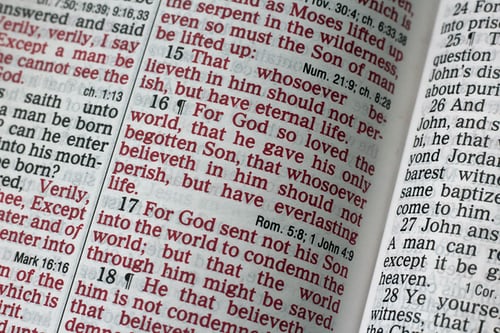 Tuning in online to Sunday mornings service I was struck by a question the guest speaker asked while teaching from I John 2 which warns us concerning antichrists. The question was a simple one.

What is your Messiah?

Not who but what. As I thought through that question it became clearer and clearer. Not only what John and today’s speaker was getting at, but how many times in my life the answer pointed to something other than Jesus.

Since I was a youngster seeking the approval of friends and family one theme often rang true. This deceiver we call Satan uses every trick in the book to derail us from our appointment as believers in Jesus Christ. If he can wreak havoc on our God-ordained identity, he wins. Or so it seems as we ponder why it is we even exist. If he can sideline us from a closer relationship with God and distract us from truth, in the way he did Adam and Eve, victory is in the bag.

But wait…… let’s expose him for who he is. A liar and a thief.

Antichrists come in all shapes and sizes. We believe there’s salvation waiting for the pain and hurt we experience here on this ball of dirt in alternate ways. Through a kind of messiah in of themselves. Like big cars and houses, that next dream vacation, the promotion we’ve been eyeballing for years, a little alcoholic relief, or winning big at craps. You name yours, I have mine.

For me, it was a measure of assets — stuff. As a young impressionable 21-year-old, I sensed the only way to cover the hurt of never quite living up to my Father’s expectation or my Mother’s admonition toward perfection was to make it on my own. To prove to the world that I had what it takes. Given just the right opportunity I’d demonstrate what I was capable of.

As the new year 2021 rolled in it became obvious in my quiet time with the Lord that He wanted me to finish a book project I started in late 2019. Not the one Colleen and I are embarking on entitled Embracing Brokenness, but a story I lived out in real time 25 years ago. Here’s an excerpt from 90 Days on the Inside – A Short-Timers Journey of Brokenness, Surrender, Healing & Redemption.

A View From The Outside – “You can observe a lot by just watching.” – Yogi Berra

It was November 21, 1995, and I find myself in this precarious position of standing in front of a Federal Judge at the United States District Court in Philadelphia awaiting sentencing on mail fraud – aiding and abetting, fraudulently inducing persons to travel in interstate commerce, and money laundering – criminal forfeiture (whatever that is). All charges stemming from a business partnership gone bad that had begun 11 years earlier. The ostrich defense really isn’t a defense by the way.

How the heck did I get here?

I was born into a family that taught me to follow Jesus from a very early age. I certainly knew the basics between right and wrong both from personal experience and the teachings of the Bible. That in of itself guaranteed nothing. What I faced was the reality that we live in a world at war. The old adage made famous by Michael Corleone in The Godfather II1, “keep your friends close and your enemies closer”, isn’t such a good idea when it comes to spiritual beings.

Facing the real possibility of jail time I mustered all the help I could get from the church, friends, and family to vouch for my character. Because I cooperated with authorities when the indictments were handed down, I had hope. Some may call that “ratting”, I call it common sense. But still, that nagging question. How the heck did I get here?

Those early years were full of fun and excitement; like most kids’ experience. But I didn’t understand how the wounds inflicted by imperfect parents and individual choices would dramatically shape my view of who I was and who God was. Furthermore, how the decisions that I would make in my effort to cover those wounds would yield all sorts of dysfunctional behaviors, landing me in this tenuous position.

You see, we were meant for something much better. Walking and talking with God in the Garden of Eden didn’t last nearly long enough. We bit that darn fruit and have been trying to make our own paradise ever since. As one of the best posers I know, I looked good in my Lincoln Town car and my glass-walled office on the 18th floor of a downtown Philly high rise gazing into the distance on a clear day to see the Delaware Memorial Bridge. And further contemplating the waterway where I would make my annual boat run, to dock for the summer, crossing the C& D Canal into the Elk River and the Chesapeake Bay. But that sure wasn’t gonna fill the God-shaped hole in my heart left from deciding I knew better than Him how to run my life.

How I decided to meet my own needs with power, money, and prestige through compromise and lawbreaking is a mystery. But I did. Guess it didn’t seem all that bad at the time, but I wouldn’t be standing in front of a judge awaiting sentencing if that notion were true. I believed my worth was measured by accumulating things; at any cost. Another old phrase attributed to Malcolm Forbes, “he who dies with the most toys wins”2. Ugh. Just ain’t so. Tell that to this 28-year-old would-be entrepreneur looking to make his mark on the world.

Stay tuned, there’s so much more to come as I share the best part of my story. How God took me from ashes to beauty in His story of redemption through brokenness and surrender.

Apparently, I’m not alone in my bad choices. You think?

Part of the reason we make bad choices is based on a false belief about who God is and who we are relative to that belief.

The speaker on Sunday cited a Ligonier Ministries’ State of Theology survey that uncovered more than just a few concerning truths about what Americans, as well as Evangelicals, believe about God, salvation, ethics, and the Bible. Every two years, the organization takes the theological temperature of the United States to help Christians better understand today’s culture and equip the church with better insights for discipleship. This survey was completed in early March as concerns related to COVID-19 began to rise.

The identity of Jesus of Nazareth has been a source of controversy through the centuries. He personally claimed to be the Son of God and equal with God (Matt. 11:27; Mark 14:61–62; John 10:33). That is why His enemies sought His death.

The Bible and the historic creeds of the Christian church plainly declare that Jesus Christ is truly God and truly man. But critics have often said that Jesus was a great teacher and nothing more. The State of Theology survey now reveals that a majority of adults in the United States hold this view.

However, if Jesus’ claim to be God is false, then He was either delusional or deceptive, but He could not have been a great teacher.

STATEMENT NO. 7: Jesus was a great teacher, but he was not God.

Historically, evangelicals have affirmed the authority of the Bible and salvation by Jesus Christ. The Bible testifies often to the deity of Christ; He is God incarnate, the Word made flesh (John 1:1; 8:58; Rom. 9:5; Heb. 1:1–4). It may be unsurprising that the majority of the general U.S. population rejects the deity of Christ, but now almost a third of evangelicals agree that He was merely a great teacher.

How are we to develop an intimate relationship with a Jesus that’s assumed to be just another good teacher. God incarnate as a real live human was how Salvation of an entire creation of men and woman would take place. A substitutionary death for sinners like me. He was the model of the image that God created in each one of us only void of the sin part. That’s a very important fact if we’re to face our own brokenness with the hope for healing.

You see, hope is the anchor of our soul. Hope was the only way this broken guy (me) looking to have his own needs met apart from God would experience the love of a Jesus that would repair those broken places in me. He’ll do the same for you.

Accumulating stuff, in my case, as a representation of my intrinsic value is a distortion of who God said I am – created in His image to love like He did. To represent Him to an unsaved world, and apparently a significant percentage of the world claiming to be saved that do not believe He’s actually God.

The problem with that understanding is that each of us will get to meet Him someday in all his deity. I’m so glad I’m on the side of knowing that He is My Messiah.