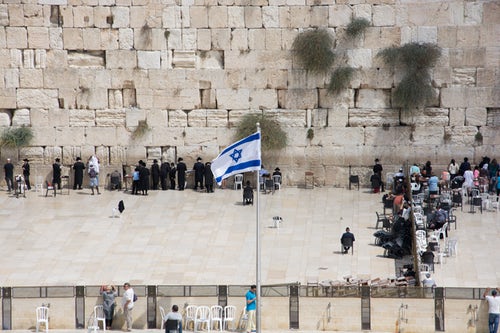 “May 14, 1948, changed everything. Suddenly the state of Israel was back in existence. Jews were returning. They were making the desert bloom and constructing great cities and building a mighty army.”

“What could explain such dramatic, unexpected developments? I didn’t have an answer. True, there were certain historical and sociological and geopolitical realities that made the rebirth of Israel as a modern nation more likely in the mid-20th-century than ever before. The collapse of the Ottoman Empire, the Holocaust, the implosion of the British Empire, the rise of political Zionism, and the support of Christians for a Jewish state were all contributing factors. But it was still one of the most unlikely events to ever happen in the history of mankind. What other people group exiled from their homeland for two millennia had ever come back home and reclaimed not just their sovereignty but they’re nearly dead language? Maybe God did have something to do with it. Maybe there was something to all those old prophecies.”

Joel Rosenberg writes fiction novels with a prophetic bent. In The First Hostage, he recounts an encounter that his character J.B. Collins had with Matt, his brother, regarding Israel’s reclamation of the land that God predicted in His word. Israel became a nation once more in 1948. Just as the Bible predicted. He was wrestling with this idea that there’s a Messiah coming to remove His people from the chaos the enemy is orchestrating in the “last days”. Yet he hadn’t quite bought it yet.

Wait for it. One of my most profound statements to date. We’re closer now to Jesus second coming than ever before. We must be the committed stewards He’s called us to be in these final days. BUT it first requires an intimate relationship with Christ before attending to the works He has for each of us.

How do we do that? If you’re like me it’s all about getting the lists done. The things that I’ve set out to do this day. My calendar is typically jammed with priorities that I’ve decided need my undivided attention each day. In principle, there’s nothing wrong with planning. In reality, I need to balance those lists with the calling that Christ has on my life.  To lead with Him at the helm. Each day should start with time alone in prayer, meditation, reading His word, or simply being in His presence. Anything less than that usually yields more chaos than productivity for me.

I’ve learned through the world’s eyes that people pleasing, and performance are what yields the best rewards, even if it’s just accolades for a job well done. Even if the job wasn’t what God called me to do.

We have an incredible opportunity to walk with Jesus in the way Jesus walked. But it starts with intimacy. It starts with a knowledge of who He is and who we are and who He created us to be. And sometimes that’s just “to be”. After all, we’re called Human Beings, NOT Human Doings. To be with Him is paramount above all else.

Friends, we’re closer to the end than we are the beginning. We should live like JESUS is coming tomorrow. There are very few prophecies in scripture left to be fulfilled. That’s the good news. The bad news is there are countless neighbors, friends, and family that have yet to know Him as their Lord and Savior. What do you say we live our life out loud with the love that God showed us when He sent His only Son to die in our place? What do you say we love our neighbors, friends, and family just like He asked us to? Unconditionally, with empathy and compassion. With concern and a listening ear. With all that we have. But all that we have must first be filled up by His Spirit. How? By investing (spending) time with Him. By seeking Him in silence. However, that may look for you I encourage you today to take hold of what’s rightfully yours as His Child. The Spirit of Love.

We all long to have good, reliable friends who love us, but how do we go about making these relationships? The biblical account of David