“We Fight This Building Every Day” 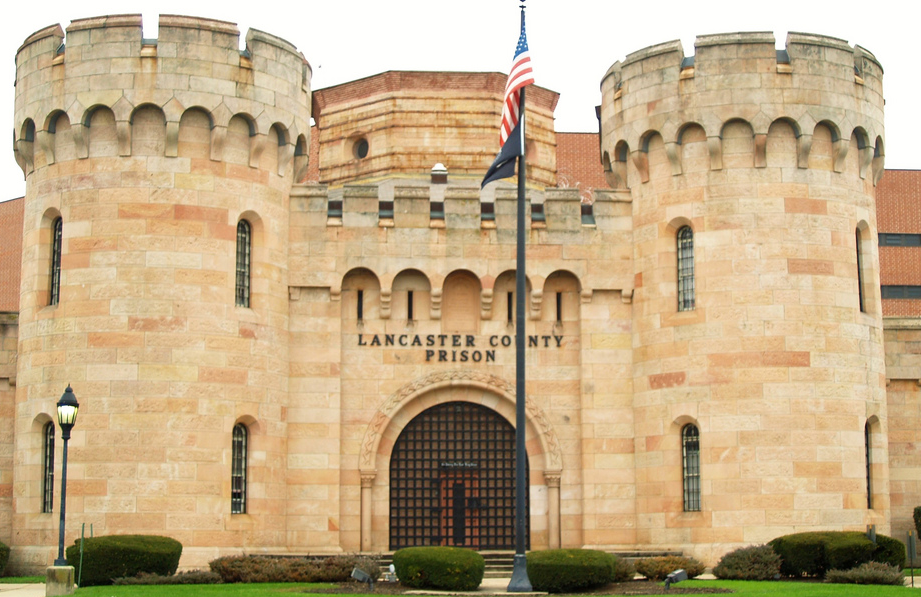 A few weeks ago I had the privilege of touring the Lancaster County Prison as part of an orientation preceding my application as a volunteer under the Chaplaincy program there. After meeting the Deputy Warden in the lobby, receiving instructions, a walk through the metal detector, and a few more passes with the wand we entered the facility. Not my first rodeo in this environment. More on that later.

LCP was built in 1851. Parts of the original structure are still around including the interesting castle-like façade facing the street. I was never quite sure what to make of it, but the look is more interesting than most prison exteriors highlighted by the razor wire all around the top. The design of the prison is almost an exact model of an 18th-century castle in Lancashire, England, with an arched gateway, a large grating of iron bars that was lowered by chains in front of the main entrance. On September 12, 1851, the first prisoners were moved into the new prison. The 110-foot tower was dismantled around 1886. The iron picket fence around the front of the prison was removed in the late 1920s. In 1972 the first extensive modernization project took place since construction.  The prison has undergone many renovations and expansions over the years with the most recent renovations being completed way back in 1992. The prison is only the third structure built as a jail in the County since Lancaster incorporated in 1729. (This from the LCP website).

Why am I telling you this?

As we worked our way through the maze of corridors overlooking active inmate units, both male and female, it became painfully obvious that it was time to tear this place down and start over again. Likely the other way around since there’d need to be a new site to house the folks inside.

One of the first things the Deputy Warden said to our group was “we have to fight this building every day”. I get it. We stepped into a large, now unoccupied housing unit, to look around and have a conversation about the challenges the staff and leadership face daily in managing not only inmates but this facility. But it also became abundantly clear what opportunities existed to help the 700+ occupants get back on their feet after release.

I’m going to shift the narrative a bit.

Paul, the Apostle, tells us in Romans, “Although I want to do good, evil is right there with me. 22For in my inner being I delight in God’s law; 23but I see another law at work in me, waging war against the law of my mind and making me a prisoner of the law of sin at work within me.” (Ch 7 – NIV)

What Paul is getting at here is the war within. Evil desires that would take us out. Much the way those captive at LCP have been taken out. Out of society and away from a freedom likely taken for granted. Yet there’s freedom available to all, no matter what the surroundings. For those willing to choose life in Christ.

The prison building in Lancaster is in terrible shape. But the work going on inside is what matters most. Paul tackles this subject further through his second letter to the Corinthians “3For though we live in the world, we do not wage war as the world does. 4The weapons we fight with are not the weapons of the world. On the contrary, they have divine power to demolish strongholds. 5We demolish arguments and every pretension that sets itself up against the knowledge of God, and we take captive every thought to make it obedient to Christ.” (Ch 1)

One of the most difficult challenges we face, first as unbelievers and even in a greater way after we come to Christ, is surrendering it all. To take every thought and every thing captive to make it obedient to Christ. By not doing so we land in our own sort of “internal prison” – the one that decides, I know better how to run my own life – fighting our own “building”.

How’s that working for you?

I made a decision, nearly 30 years ago, to fight in my own strength as I faced the most crucial conversation of my life. I argued with the Holy Spirit, after a clear knowing in my head and heart, that I MUST remove myself from a corrupt business partnership. Compromise landed me in the untenable place between having a whole lot of money, power and prestige and a relationship with God who was having none-of-it.  Yet I persisted in my pursuit of significance, as the world would see it, telling God that I could fix everything. That I knew better than He did.

That didn’t work out too well. Like inmates at LCP, I lost my freedom, my finances, and nearly my family.

It was November 21, 1995, and I was standing in front of a Federal Judge at the United States District Court in Philadelphia awaiting sentencing on mail fraud charges stemming from that bad decision made 6 years earlier. (for the record the ostrich defense isn’t really a defense) When the gavel came down, I was sentenced to 90 days at a Federal Prison Camp (FPC) of their choosing. I would learn much later it was located in Fairton, New Jersey. When I reported to the US Marshalls office on December 1st I was shackled and chained to the guy next to me and led out the door to experience the most horrendous weekend of my life. We arrived at the facility and the BOP (Bureau of Prisons) had not yet received the paperwork assigning me to the FPC on the premise. So, without a designation, I got to spend my first 3 days in lockdown, famously known as the hole, inside the FCI (Federal Correctional Institute) medium-security facility across the street. The cell was the exact size, 7 x 10, that most inmates at Lancaster County Prison get to occupy 12 to 18 hours out of every day. In my case, it was 23 out of 24 hours for three days. You’ll have to read the book – when it comes out – to see how God came through.

There are consequences to the choices we make. Freedom takes on a whole new meaning when you lose it. Many of the inmates at LCP recognize that truth now that they’re looking from the inside out, as did I. We have the criminal record to prove it. Most of the world outside those four walls are living in a prison without the criminal record. Prisoners in a building we fight every day – whether it’s the building we call the flesh, the devil that seeks to exploit that flesh or the world that dictates how each of us is valued.

Surrender may very well be the hardest thing we ever do. Surrender from the control of our own destiny to the life we so desperately need in Christ. I know – it’s counterintuitive. I get that. But I would much rather surrender to Christ than the US Marshall. That was not a good experience. But it was part of my life. And I can now say that surrender to the Holy Spirit has yielded true freedom and the significance I was looking for in a world system set against me. Set against God and His Word.

Let’s not fight the building any longer. Let’s join the ranks of Child of God and surrender our belief in having the right to run our own life.

I ask you again, how’s that working for you?

Let’s go all-in for Him and walk in the freedom promised to each of us that choose Christ.