Prayer And The Berlin Wall by Charles Buttigieg 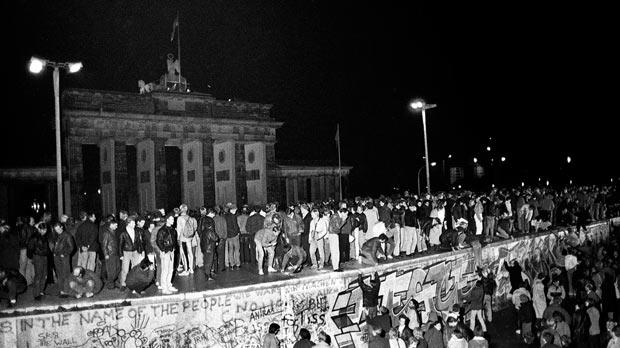 Dismayed with the Berlin Wall, the physical split of the ongoing Cold War and the repressive East German regime, Christian Führer, Protestant pastor of St Nicholas church in Leipzig, started organising prayers for peace every Monday evening, beginning in 1982.

It was a bold initiative, because the Communist government strongly discouraged its citizens from being involved in religious activities. Initially, fewer than a dozen people attended the prayer meetings. Still, the meetings continued without fail.

In 1985, Pastor Führer put an ‘open to all’ sign outside the church.

The gesture was loaded with symbolism because the church was the only space in East Germany where people could talk about things that could not be discussed in public.

In 1988, Pastor Führer invited 50 people who were part of a movement that advocated the right to leave East Germany to a discussion at his church. In the event, about 600 turned up and many began attending his regular prayer sessions.

The prayers and the open-air vigils that followed, open to everyone, attracted more and more people. Christians and atheists all started to seek refuge there. Attendances rocketed. The regime began to lose patience.

On May 8, 1989, the authorities barricaded the streets leading to the church, hoping to put people off. But this had the opposite effect. The congregation grew. The prayer meetings led to a number of peaceful political protests in Leipzig and other cities, which became known as the Monday demonstrations.

As the scale of the gatherings grew, Pastor Führer and his followers were threatened and pressured to stop the meetings. Nonetheless, they remained resolute. The official reaction, in the words of the pastor, included beatings and arrests of demonstrators at protest rallies in Leipzig, Berlin and Dresden.

The wall would not have collapsed without people meeting to pray

Things came to a head on October 7, 1989, the 40th anniversary of the German Democratic Republic. People crowded in front of St Nicholas church. The authorities wanted to close the church. The police used brute force against the demonstrators and many people were beaten. Hundreds were arrested.

On October 9, ignoring death threats and the dreadful presence of huge lines of armed police, thousands gathered to pray for peace.

The congregation then joined an estimated crowd of 70,000 on a protest march against the country’s regime. It was the largest impromptu demonstration ever witnessed in East Germany.

The meeting started with an hour-long service at St Nicholas. Pastor Führer then led worshippers outside. A huge crowd of demonstrators holding lit candles began walking around the city, chanting “we are the people” and “no violence”.

They were accompanied by thousands of helmeted riot police ready to intervene. The tension was enormous. People present feared a massacre. However, at the decisive moment the police stood aside and let the protesters march by.

They did not attack the crowd. The protest movement began to lose its fear. The dam cracked.

The experience inspired Monday demonstrations throughout East Germany in the following weeks. East German Communist leader Erich Honecker resigned. The dissidents became increasingly heartened, with around 300,000 taking part in the protests on October 23.

Exactly a month after the events of October 9, the Berlin Wall came down amid scenes of jubilation. It was one of many great events in a year that saw the Iron Curtain torn down, the end of the Cold War and ultimately the reunification of Germany on October 3, 1990.

Pastor Führer, who died last June, was totally convinced that the Berlin Wall would not have collapsed without the events in Leipzig, which started with people meeting to pray. In those prayer meetings, people believed in the power of prayer.

Pope Francis teaches that God has a weakness for the prayers of His people. Speaking during his morning meditation on November 16, 2013, the Pope added: “Indeed, prayer is man’s greatest power.

Therefore, we must never tire of knocking at the door of God’s heart and asking for help. For God is a relentless warrior when He is called upon to defend His people.”

*Reprinted from The Times of Malta – Prayer and The Berlin Wall by Charles Buttigieg November 8, 2014*